Since I’ve Been Gone

Hey, everyone. It’s been a while. And I wish I could apologize for it and say I won’t do it again. But I probably will. It happens after a while of blogging; I just get tired of putting up content.

Don’t get me wrong. At first, it’s the best feeling in the world to feel the keys beneath my fingers, trying to compose my thoughts about a book and engage with an audience. But some days, I just don’t want to. There are times where I just want to read books without worrying about blogging and it’s amazing. For instance, lately, I’ve been expanding my tastes to romance, both contemporary and historical, and it’s been great. But do I want to blog about all the books I’ve read, even if I liked them?

I guess from here on out, what I can say is that if I ever do blog, it’ll be for me and my own satisfaction. And that doesn’t mean I don’t want people to read my posts. If one more person wants to read The Duchess Deal or another book because they’ve read a blog post of mine, that’s great. However, I’m not going to stress out about where my blog is going or projections for the future of my blog. Because you know what? I’m doing just fine.

I Think This Might Be the End of My Blog…

Hey, everyone! I know I’ve been gone for a while and I’m sorry about that. But I don’t think I’m as passionate about book blogging as when I first started this blog in 2015, so after I finish writing a few more committed posts, I’m going to stop posting for good. I’m not sure whether to leave my blog up, though, or delete it.

It was nice talking to you all!

Hi, lovely readers! I wanted to ask you all if you know of any YA book clubs that are held online, because I would love to join one! Feel free to leave the name or link  to the book club in the Comments Section!

Should I Stop Using Rating with My Reviews?

Hey, everyone! I hope you’ve all been great! I just wanted to open this discussion to anyone who has thoughts on it: reviews with ratings.

You see, at the beginning of every review I write, I give the book a star rating, showing how I liked reading it overall. It’s only once you read the review that you know exactly why I gave the book the rating that I did.

But are ratings unnecessary? Do I really need to rate a book good or bad and potentially affect other people’s experience of the book? Should I just explain why I like and/or didn’t like it, and let the review speak for itself? I don’t know… what are your thoughts? I’d love to hear them!

It’s Monday! What Are You Reading? 39

Hi, everyone! Welcome back to another post of “It’s Monday! What Are You Reading?, hosted by Kathryn @ Book Date. I got the chance to read some of the books I wanted to last week, but still haven’t finished 101 Things I Learned in Advertising School. Hopefully, if I don’t read anything else for the time being, I might actually finish it! 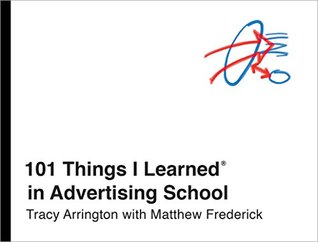 What I’m Planning to Read Next:

Well, that’s all for now! Who knows if I’ll stick to it, though?

Also, if you’re reading anything really exciting at the moment, feel free to let me know in the Comments Section below!

Rose Asher believes in ghosts. She should, since she has one for a best friend: Logan, her annoying, Netflix-addicted brother, who is forever stuck at fifteen. But Rose is growing up, and when an old friend moves back to Laguna Canyon and appears in her drama class, things get complicated.

Jamie Aldridge is charming, confident, and a painful reminder of the life Rose has been missing out on since her brother’s death. She watches as Jamie easily rejoins their former friends–a group of magnificently silly theater nerds–while avoiding her so intensely that it must be deliberate.

Yet when the two of them unexpectedly cross paths, Rose learns that Jamie has a secret of his own, one that changes everything. Rose finds herself drawn back into her old life–and to Jamie. But she quickly starts to suspect that he isn’t telling her the whole truth.

All Rose knows is that it’s becoming harder to choose between the boy who makes her feel alive and the brother she isn’t ready to lose.

Hi, everyone! I’m back! Before I start talking about this book, I’d like to say thanks to anyone who has given me advice about my reading slump problem. I’m currently rereading The Alice series, and I’m having fun with it so far, even though there are a few odd things that I haven’t noticed before… But I’m still rereading with a passion, so I guess it’s not too bad. The series still contains a lot of gems, though. But enough about that; let’s talk about Invisible Ghosts!

Now, if I’m being honest, I was really, really excited for anything written by Robyn Schneider. Especially after The Beginning of Everything and Extraordinary Means. I kept on going back to her Goodreads page over and over again, just to see if she was writing a book and when it would come out. When I finally found out more about the book she was writing, there was nothing that could have stopped me from reading it! Especially since it also had to do with theatre! That hype is probably why it ended up being more of a miss than it would have otherwise. I was just too invested to the point where my expectations would never be met.

It’s not that I didn’t like the characters. They were interesting enough. I especially like Rose and her brother’s relationship, even though it kind of worried me in the beginning. And her friends were pretty fun, albeit a bit slippery. But overall, the dynamic of the characters and dialogue were worth reading.

It was actually the world-building and mythology that didn’t appeal to me as much. There was just so much left open to guessing in that area. Where exactly did Rose and Jamie’s ability to see ghosts come from? How come ghosts haven’t been popping up everywhere Rose goes? How do ghosts affect Rose versus Jamie? And that’s just the tip of the question iceberg! 😉

So, in the end, I didn’t enjoy Invisible Ghosts as much as I thought I would, but I’m glad I got a chance to read another one of Robyn Schneider’s novels. And for anyone who is interested, Invisible Ghosts comes out on June 5th, 2018!

Have a wonderful day, everyone!

I received an advance reader’s copy from HarperCollins Canada in exchange for an honest review.

Hi, everyone! Sorry for disappearing on you! It’s just that I’ve been faced with a reading slump and have no idea what to do about it. Every book I try to read starts off as enticing, but then I end up bored with it. Usually, when this happens I just read another genre, but that doesn’t seem to be working…

If you have any advice on what to do when in a reading slump, I would love to hear it!

Have a nice day!

Toronto Prose Mill is Holding an Open Call for Submissions!

Please send all submissions via email to torontoprosemill@gmail.com by May 1st at 11:59 pm, and ensure that they meet the criteria below:

– Stories can be submitted in the ‘Submission’ field by copying and pasting, as a Google Doc link, or sent by email to torontoprosemill@gmail.com so long as authors’ names do not appear anywhere in the document, including the file name *WARNING copy and pasting will alter the formatting of the story
– Each story can be up to 8,000 words in length; there is no minimum word count
– Works must not have been previously published
– Works must be written by the individual(s) submitting the piece(s) for consideration
– Co-authored works must be accompanied by all authors’ approval in order for such submissions to be considered for publication
– Submission forms are confidential and will only be viewed by the Toronto Prose Mill team

If there are any questions or concerns about the submission form please send an email to torontoprosemill@gmail.com. Also, for further information about Toronto Prose Mill, feel free to check out its site!

Have a nice day, everyone!

Hi, everyone! As I said in one of my previous posts, to celebrate reaching the milestone of 1000 followers, I am hosting a giveaway! In this giveaway, the lucky winner will receive four ARCs of the following titles: In Search of Us by Ava Dellaira, Now a Major Motion Picture by Cori McCarthy, The Foreseeable Future by Emily Adrian, and My So-Called Bollywood Life by Nisha Sharma. Here are the rules:

2. The giveaway is for Canadian and US residents only.

3. Participants must fill in all the required entries.

5. The winner will be notified a day after the giveaway closes, but if they do not respond within 48 hours, someone else will be picked as the winner.

To enter, just visit in the rafflecopter giveaway link here.

Take care, everyone! And keep reading!