Blog Tour: All the Stars Left Behind by Ashley Graham (Review)

All the Stars Left Behind by Ashley Graham

Relocating to Arctic Norway would put a freeze on anyone’s social life. For Leda Lindgren, with her crutches and a chip on her shoulder the size of her former Manhattan home, the frozen tundra is just as boring as it sounds. Until she meets her uncle’s gorgeous employee.

Unfortunately, no matter how smoking hot the guy is, Roar comes with secrets as unnerving as his moving tattoos. And Leda doesn’t trust him.

Roar shouldn’t be drawn to the moody human girl with eyes that leave him weak in the knees. But when Leda gets shot by one of his enemies and survives, Roar finally understands why he’s drawn to her: Leda is exactly what he was sent to Earth to find. A weapon of immense power capable of saving his planet.

She just doesn’t know it yet.

Hi, everyone! I recently finished All the Stars Left Behind by Ashley Graham, and I’ve got to say that overall, I liked it! There were some parts that I was kind of iffy about, but, by the end, it was pretty good.

Firstly, I think I liked how action packed the book got at times. During the beginning, the book was a bit slow for my taste. But once something actually happened, I was fully engrossed in the story. And trust me, a lot does happen in this book. Almost to the point where it’s unreal. But I think it manages to jampack everything that could happen while not being too dramatic. Plus, the book would do a nice job of explaining any raised questions that readers might have right away.

As for the characters, for the most part, I really liked the ones that were fully fleshed out, like our protagonists, Leda and Roar. Without thinking about pairings or whatnot, I really admired Leda’s ability to stay strong and sensible, even with everything that’s been going on. Even at times where she’d doubt herself or want nothing more than to follow her desires, she doesn’t, because she knows there is more at stake. Plus, I like the way the author treats her disability in the novel, not something to be overlooked but at the same time, it doesn’t limit Leda’s potential to be a hero at all. The only problem I had with her was her link to Roar. While it was explained away and everything, I still kind of felt like it was too instalovey for me. I have few exceptions for instalove, and this wasn’t one of them… Other than that instalove and the amount of time it would take to get from one POV to the others, I really liked reading about our main characters.

Well, that’s all I have to say about All the Stars Left Behind by Ashley Graham. I’d recommend it to anyone who doesn’t mind instalove and is in the mood for a good Sci-Fi read! If you have any thoughts or questions about this book, feel free to leave them in the Comments Section below! Thanks for reading, everyone! 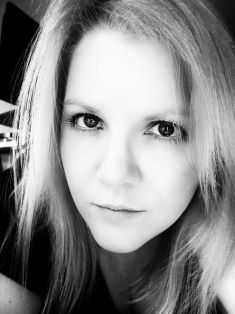 Ashley Graham was born in Ontario, Canada, and has since lived in five countries. Before writing her first manuscript in 2015, she worked as a clerical assistant, quality assurance officer, chef, and stay-at-home mom/homeschool teacher. When she isn’t writing or reading every book she gets her hands on, Ashley enjoys online window shopping, Netflix binges, and spends way too much time thinking about space travel. ALL THE STARS LEFT BEHIND is her debut novel.

One thought on “Blog Tour: All the Stars Left Behind by Ashley Graham (Review)”